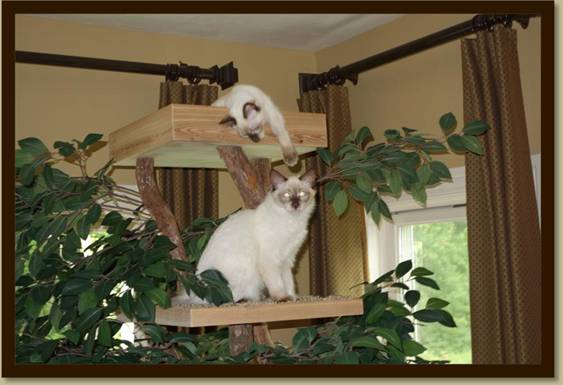 Dausey Testimonial for Gambades Cattery
Our Gambades Balinese kitten littermates, Mimi and Maurice, are now six months old, and we are just overjoyed with them! They are the most interactive, beautiful, and delightful cats we have ever seen. Their temperament is remarkable, as they love to be near us and are so intelligent and inquisitive. When people come to visit, the kittens are always the stars of the show. No one can resist their super soft fur, big blue eyes, and friendly personalities. Even the staff at the veterinarian’s office vie to see them when we visit.
We have had several cats in our life over the years, all mixed breeds from rescue situations. As our last cat, Boo, approached her twentieth birthday, she was in failing health. We were heartbroken at the thought of losing her affectionate, talkative, sweet presence in our family. Knowing we would want to find some future furry family additions, we researched cat breeds over a number of years to find a breed that would have the qualities of which we were so fond.
That led us to the Balinese breed and contact with numerous breeders, including Marcia Kahler, of Gambades Cattery. It was important to us to work with a reputable, quality breeder. Having never owned a Balinese cat, we had a LOT of questions. Marcia responded to our e-mail inquiry so promptly and thoroughly. Despite the fact that we had made no commitment, she took the time and effort to answer every question and more. In speaking with Marcia by phone, it was evident that she was very knowledgeable. She helped us discern whether the Balinese breed would be right for our family, and the more we learned about the breed, the more we knew it was the right choice.
Gambades became clearly our top cattery preference, and we decided to ask for a pair of kittens from the next litter between parents, Marco and Mimi. While health, sociability, and personality were more important to us than color point, we especially adored the chocolate point Balinese appearance. We were added to the waiting list, and the excitement began to build. Marcia kept us posted on the upcoming litter, and then one day we learned the kittens had been born. Within weeks, we knew little Mimi and Maurice, two gorgeous chocolate points, would be ours. We felt really fortunate. It was so much fun watching them grow, as new pictures were posted to the website, and we received updates regularly.
When the kittens were old enough to come to their new home with us in Wisconsin, Marcia made all of the arrangements for the kittens’ airline flight. We were concerned about how stressful this might be for them, however, Marcia assured us that they would handle it well. The day they were to arrive, Marcia called to let us know the kittens were on their way. The anticipation was off the charts! After picking them up and bringing them home from the airport, they immediately made themselves at home playing with one another and eating heartily. We kept them in one room overnight in order to acclimate them, but they couldn’t wait to get out of the room and explore.
It was obvious these kittens had been well cared for, handled with love, and socialized for attachment to their people. Mimi is exuberant, athletically playful, and has mastered the most innocent appearance, no matter what predicament in which she finds herself. She is very sweet and loves to cuddle, chase feathers and ping pong balls. Maurice shows off by carrying around his favorite toys in his mouth. He is an entertaining clown and loves to sleep on his back with his paws up in the air. Both kittens are very intelligent (know their names and a few tricks too), extremely affectionate, and love attention.
We would recommend that anyone consider getting two kittens, if possible. Mimi and Maurice are very bonded, and they adore one another. Never far apart, they play together constantly. It is a blast to watch them interact. Hide and Seek is one of their favorite games, as well as chasing one another up and down the stairs or along hallways. They also groom one another and cuddle together too. Their days are so much richer with one another.
We are honored to be Mimi and Maurice’s people. They have fully endeared themselves to us and are the best cats ever! We know that their start in life has made all the difference. Marcia is passionate about breeding quality kittens that will become treasured pets. She made the process easy and fun. We know she will always be there for us if we have questions or need advice in the future, and we look forward to that long-term relationship. As long as Marcia is operating her cattery, we will never think of getting a kitten of another breed or from anyone else. Gambades Cattery truly made our kitty dreams come true!
~Greg, Jan, and Noah Dausey